Not everyone knows, but there are different types of pork bacon. Depending on which part of the pig the bacon is cut from and how it is prepared, bacon has different tastes and textures. While there are more than just these seven, today we’ll discuss 7 popular bacon types. 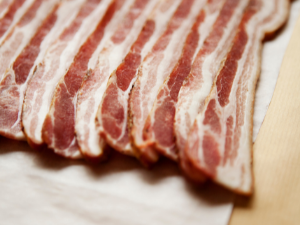 The most popular type of bacon, streaky (also called American or side bacon) is easy to find in stores. It comes from the fatty part of the pig’s belly. It consists of 1 part meat for every 3 parts fat. And the difference is visible! Which is where it derives its nickname – streaky bacon. You can see the various streaks of fat, meat, fat, meat. It’s like it has its own design.

Streaky bacon is typically sold in long narrow slices that perfectly showcase its pattern of pink juicy meat within white fat. The rind is removed before it is sliced. The bacon is cut in various sizes. Some prefer it thin while others prefer it extra thick. It comes in regular and thick cuts as well.

It has a strong flavor, whatever its cut may be, and has a firm texture. The high-fat content makes it ideal for crispy bacon and it is most often served for breakfast.

Streaky bacon is made by a curing process. It is cured in salt, spices and is often smoked. Manufacturers often use different types of wood smoke to change its flavor, smoking it in hickory, pecan, or apple smoke. Some prepare it with maple or black pepper to further change and enhance its flavor. 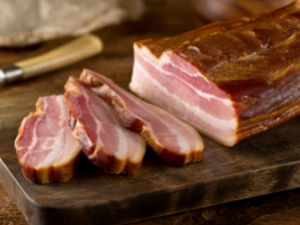 Slab bacon is what its name suggests- thick chunks or large slabs of cured bacon. Unlike streaky bacon, the rind is left intact. It is obtainable in thin or thick cuts. Chunky slabs are most true to the meats’ natural form. It is ideally served in soups, stews, or served in other entrees.

Slab bacon originates from the belly and sides of the pig, meaning its fat content is still high. 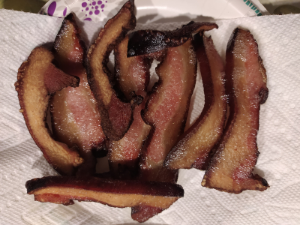 Jowl is a cut of pig bacon that comes from the pig’s cheeks. It is cured and is often served in soul food, fried, included with breakfast, or added to a sandwich for additional flavor. This particular type of bacon is also what Guanciale is made from. Guanciale has a long curing and drying time and is traditionally left unsmoked. It has a fatty, soft texture and a strong flavor that is often used in Italian-style foods. 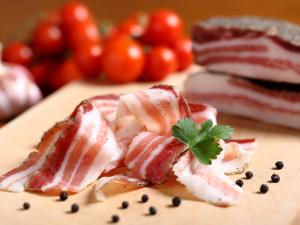 Pancetta is an Italian version of streaky bacon. Made of cured pork belly, it is often salt-cured then dried. Because of this process, it can be consumed raw. In addition to salt, it is often cured in spices like clove, rosemary, and juniper.

Pancetta is best known for being rolled up and sliced into paper-thin circles. These thin slices are ideal for wrapping around meat and vegetables before cooking them to enhance their flavor. It is also perfect for soups, sauces, pastas, or on charcuterie boards. 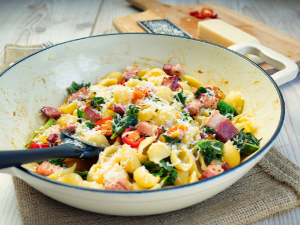 This type of bacon is derived from the belly or loin of the pig. It is cured in salt and seasonings but is never smoked. It is cut in thin, small strips or into cubes and matchstick pieces. Its chunky texture and salty flavor make it an excellent addition to salads, pastas, omelets, potato dishes, sauces, roasts, or served with grilled vegetables. It is used to increase flavor but is not typically eaten alone. 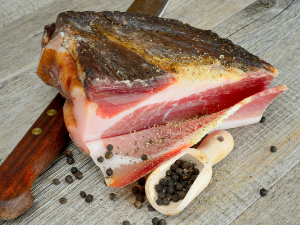 Originating from Northern Italy, Austria, and Switzerland, this type of bacon is thinly sliced cured meat. It comes from the pigs’ leg instead of its belly so contains more muscle than most types. With less fat, it is often sliced into narrow pieces and brined, smoked, then air-dried. It can be eaten raw thanks to this process. It is typically wrapped around fruit, placed on sandwiches, or included in salads, however. It can even be cooked or pickled!

Speck bacon is often cured in an array of blended spices including piney or crushed juniper berries. 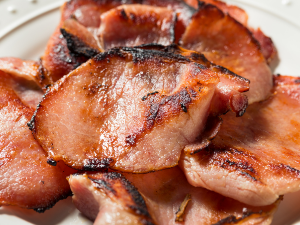 Also called Canadian bacon, back bacon comes from the leaner loin of a pig or its middle back area. It has a much higher meat to fat ratio than American bacon. Often coming in thicker slices, it can be purchased in round cuts. With a similar appearance and taste as ham (it derives from the same area of the pig as ham), it has fewer calories and less fat than other types of bacon.

Canadian bacon is hard to find in the United States, but when found it is often ready to eat right out of the package! It does not need to be cooked. It has a chewier texture than American bacon and can be obtained smoked or unsmoked though unsmoked is more common.

These are seven types of bacon to consider adding to your menu. We recommend purchasing a commercial griddle to begin frying them for customers immediately! 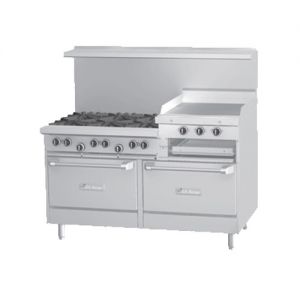 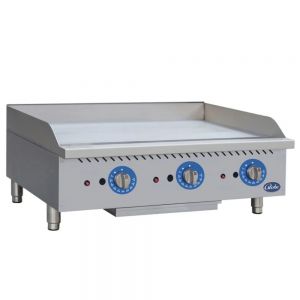 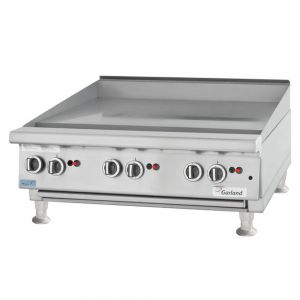 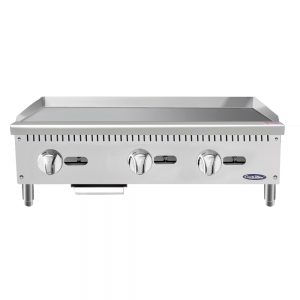